Topi are enemies in Ice Climber. They walk around and if they find find broken blocks they repair them with ice. In the American version, they look like small yetis, but in the Japanese version, they are actually seals. This is due to the fact that Americans protested it was too violent to hit seals with hammers (as this is a reference to seal hunting).

Topis reappear in Super Smash Bros. Melee, and they can be found in the Adventure Mode walking around on the Icicle Mountain stage, where the player can kick them off the screen. They are pushing Freezies, an item from the Super Mario series which makes the ground slippery in the game Mario Bros. They also appear as a collectable trophy. The description of the Trophy says: "Topis debuted in the game Ice Climber, shuttling ice with which to repair in the floor. They were kept really busy, as Nana and Popo constantly cracked floors with single strikes of their ice hammers. Despite the monotony of their chilly work, these creatures never slacked off for an instant." 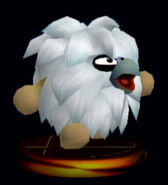 The Japanese design of the Topi shown by their Super Smash Bros. Melee trophy
Community content is available under CC-BY-SA unless otherwise noted.
Advertisement